Skip to navigation Skip to content Skip to footer

On Friday, February 21st, the Department of Statistical Science and Operations Research (SSOR) and the Department of Biostatistics jointly hosted the inaugural VCU SSOR-Biostatistics Distinguished Lecture, delivered by Daniel Heitjan, Ph.D. of Southern Methodist University. This Distinguished Lecture series is planned as a yearly event, jointly hosted by the two VCU departments. 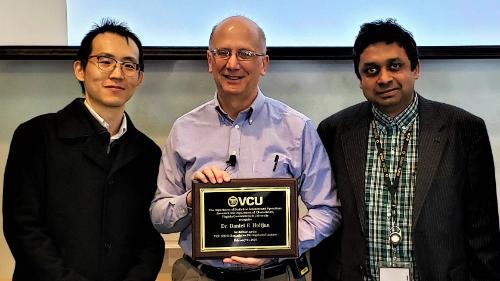 The picture at right was taken after the commemorative plaque was presented.  From left to right are Yanjun Qian, Ph.D. (SSOR), speaker Daniel Heitjan, Ph.D., and Dipankar Bandyopadhyay, Ph.D. (Biostatistics).

Heitjan's talk was titled "Measuring Sensitivity to Nonignorable Incompleteness," with the abstract as follows:

Statisticians have long recognized the potential biasing effects of nonignorable missing-data mechanisms. For example, if, say, larger observations are more likely to be missing or censored, then standard estimates such as the sample mean of the observed data (when some subjects are missing) or the Kaplan-Meier curve (when some subjects are censored) are invalid. Unfortunately, methods that attempt to estimate or test the degree of nonignorability are unsatisfactory, thanks to conceptual and numerical difficulties associated with nonignorable modeling. How then shall we handle such data sets?

In this talk, I describe an approach to such a sensitivity analysis based on the index of local sensitivity to nonignorability (ISNI) statistic. An R package is available to conduct this analysis for the univariate GLM and a range of models for clustered or longitudinal data. I will demonstrate applications in live-data examples.

In a cross-campus partnership, we were pleased to welcome Daniel Heitjan, Ph.D. of @SMUDedman to give the inaugural @VCU SSOR-Biostatistics Distinguished Lecture, "Measuring Sensitivity to Nonignorable Incompleteness." #statistics #missingdata @bandipu pic.twitter.com/XP1Z8YEPor